ALF On Other Shows

Other than his own sitcom, his two cartoons and his talk show, ALF has appeared on a number of other shows as well. In this section you'll learn the names of these shows and a little bit of information about ALF's appearance on them.

Here is a picture from one of the episodes he appeared in: 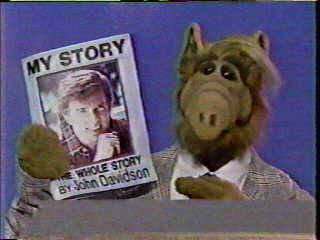 ALF made a small appearance on the 8th episode of the second season of Matlock, entitled The Network. I haven't seen the episode personally, but to my knowledge he appeared right near the end where he delivered a joke or two before the episode was over.

In 1991, a year after ALF was cancelled by NBC, ALF was a special guest star on an episode of Blossom. The episode in question is the 8th episode of the first season, entitled The Geek. The story of the episode is that Blossom put herself in a position where she has a date with a geek. She doesn't really want to go out with him because of the possible effects to her social life but feels that a promise is a promise. She's torn about what she should do. As she falls asleep with her ALF doll in her arms, she has a dream where she is at the pearly gates of heaven where ALF is the guardian.

Here are a couple of pictures from his appearance on Blossom:

Love Boat: The Next Wave

In the 16th episode of the second season, entitled Trances of a Lifetime, a hypnotist uses his power to make a young girl believe that her ALF doll can talk to her, since she has a problem she won't talk to anyone else about. The hypnotism works and she has a conversation with ALF.

In 2000, ALF made his first appearance in several years when he got to host an episode of Talk Soup on the E! channel. In Talk Soup the hosts show clips of previous talk show's that has aired the day before. The host's job is to make humorous comments on the clips we're being shown.

Here is a picture from when he hosted Talk Soup: 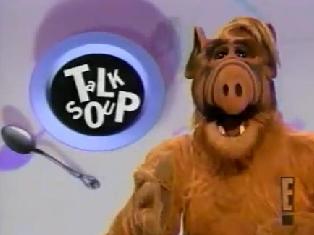 ALF was the special guest in the 12th episode of the first season, entitled Out of this World. He helped her host the Webkini Girls segment, where he showed great interest in the contestants. He had the following to say about his relationship with Cindy Margolis:

"Cindy and I have a history together; we're both former swimsuit models," then added, "It's always nice to work with someone who has more hair than I do."

During the special from 2002, ALF was sitting in the audience next to Michael Gross, who played Steven Keaton on Family Ties. They had a little segment together where Michael requested to sit somewhere else. Kelsey Grammer from Frasier apologized and said that someone had to sit next to ALF. Michael responds that his problem wasn't with ALF, it was with David Hasselhoff who was disturbing him by having a conversation with his car KITT by speaking into his watch. ALF was also mentioned in Mr. T's Pity List that he read to the audience. He said the following:

"I pity ALF because he never did get to eat the cat."

Here is a picture of ALF and Michael Gross sitting in the audience: 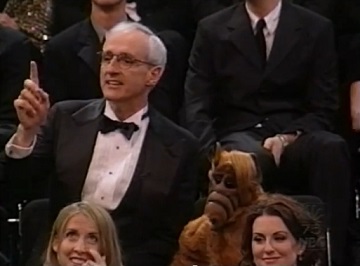 ALF was present at the first annual TV Land Awards show in 2003 where he sat next to John Ritter, who he called "John Bitter." He also made an amusing comment about how he lets Gary Coleman borrow his suit.

In 2007, ALF was interviewed by host Bill O'Reilly as the TV Icon of the Week on The O'Reilly Factor. O'Reilly asks ALF where he's been for the past 17 years, claiming we haven't seen him since the cancellation of the show, which in fact isn't true at all. ALF in turn takes some shots at O'Reilly himself.

Here is a picture of ALF during the interview: 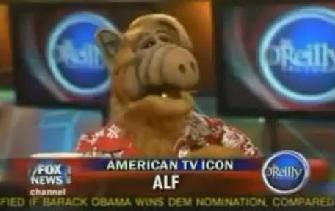 After almost four years since his last appearance on TV, ALF returned on October 7th in an episode of Good Morning America on ABC, as a part of their Totally Awesome 80's Week. We get about two minutes with ALF as his good old self, funny as ever.

Here is a picture from his appearance:: 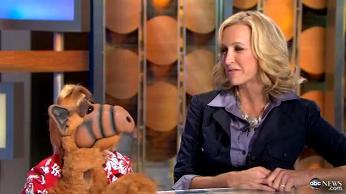 ALF made his first appearance on a TV-show in several years in August 2016. He was on the 6th episode of the second season of Mr. Robot, playing himself.

Here is a picture of his appearance on rhe show: 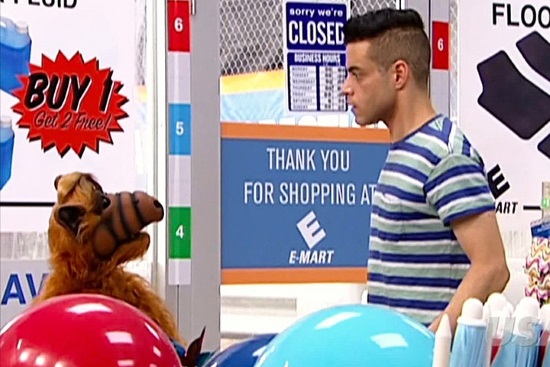 Interesting piece of trivia: ALF holds the record as the character who has appeared on more shows than any other character ever has. Let's hope we'll get to see more of him soon.

- In the cartoon show American Dad, the Smith family has an alien, by the name Roger, living with them. Much like ALF, Roger loves to eat, he’s very sarcastic and he comes up with ways to get out of the house as many times he can, causing problems for the family. The creators of the show clearly thought about ALF when coming up with this character.


Harry and the Hendersons

- The sitcom Harry and The Hendersons, based on the movie with the same name, is about a Bigfoot living with the Henderson’s, a perfectly normal American family. At least until they met a Bigfoot they named Harry, who soon becomes a part of their family. Harry, just like ALF, breaks a lot of things, and the family is forced to hide him from the public, because if the public would know about him he would no longer be able to stay with the family. The creators of the show clearly got some inspiration from ALF when they did this show.